Book Now
Joins us for a talk from Chris Stewart, where he will be covering the process from Lidar scans to UnReal VR/AR production including:
1. Lidar scanning
2. Build Out in Maya
3. UnReal Engine
4. Brainstorm Production Software 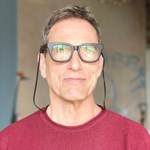 Found of Virtual Brooklyn
Chris Stewart formed Virtual Brooklyn in 2010 and he has over twenty five experience in VR, AR and in broadcast production. He is an Emmy Award winning Virtual Set Production Designer and experienced technician in the implementation of Real Time production workflows. He currently works at CNBC in the Real Time Graphics Department.

Chris specializes in VR, AR and XL design. He works in  MAYA, UnReal, Substance, Reality Capture software. He also specializes in 3D laser scanning of environments, all aspects of real time green screen production including design and build out of studios.

What we are listening to! A series of podcasts by Nesta, on AI and its influences on modern life

Digital Transformation: Your Journey to the Cloud